Whisper of the Heart (Japanese: 耳をすませば Hepburn: Mimi o Sumaseba, literally “If you listen closely”) is a 1995 Japanese animated romantic coming of age drama film directed by Yoshifumi Kondō and written by Hayao Miyazaki based on the 1989 manga of the same name by Aoi Hiiragi. It was animated by Studio Ghibli for Tokuma Shoten, Nippon Television Network and Hakuhodo, and distributed by Toho. The film stars Yoko Honna, Issei Takahashi, Takashi Tachibana, Shigeru Muroi, Shigeru Tsuyuguchi and Keiju Kobayashi. It was the first theatrical Studio Ghibli film to be directed by someone other than Miyazaki or Isao Takahata.

Whisper of the Heart was Kondō’s only film as director before his death in 1998. Studio Ghibli had hoped that Kondō would become the successor to Miyazaki and Takahata.

It was the only Ghibli film not directed by Miyazaki or Takahata for seven years until The Cat Returns was released in 2002, which focused on a minor character of the film, Baron. 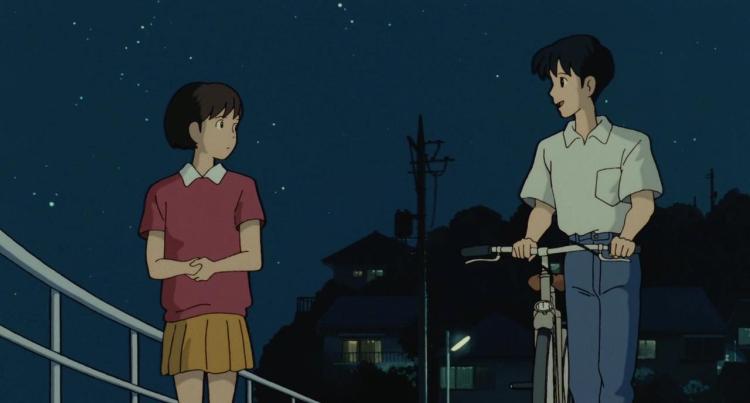 A love story between a girl who loves reading books, and a boy who has previously checked out all of the library books she chooses.

Those who have gone through Shizuku and Seiji’s ages, if sometimes look back at that good time, most of those who live in big cities have more or less found some nostalgia in the movie. In the afternoons go kite, catch crickets or lie leisurely on the grass looking at the clouds. The times when there is a disturbance in the soul when the sun rises, sometimes the sadness is at the sunset. Then the first sentiments, the vibrations with the opposite sex. Difficult and charming before the adult world in front?

Whisper of the Heart was based on the manga Mimi o Sumaseba which was originally created by Aoi Hiiragi. The manga was serialized in Shueisha’s shōjo manga magazine Ribon between August and November 1989, and a single tankōbon volume was released in February 1990. The volume was reprinted on July 15, 2005. A second manga by the same author titled Mimi o Sumaseba: Shiawase na Jikan was serialized in Shueisha’s Ribon Original in 1995. A spiritual sequel to this film adaption, The Cat Returns, was turned back into a manga by Aoi Hiiragi, under the name Baron: Neko no Danshaku. 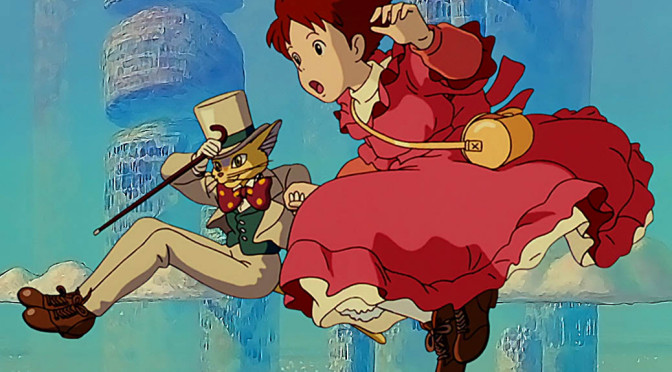 The film score of Whisper of the Heart was composed by Yuji Nomi. At times during the film, Shizuku translates John Denver’s song “Take Me Home, Country Roads” to Japanese for her school’s chorus club. She writes her own humorous Japanese version of the song, called “Concrete Road,” about her hometown in western Tokyo. The songs were actually translated by producer Toshio Suzuki’s daughter Mamiko with Hayao Miyazaki writing supplemental lyrics. These songs play a role at points in the story. Recording of “Take Me Home, Country Roads,” performed by Olivia Newton-John, plays during the film’s opening sequence. The song was also performed by Shizuku’s voice actress Yoko Honna.

This was the first Japanese film to use the Digital Dolby Digital sound format. An English dub of this film was released by Buena Vista Home Entertainment on March 7, 2006. Turner Classic Movies televised both the dubbed and subbed versions on January 18, 2006 as part of their month-long celebration of Miyazaki (in honor of his birthday, January 5). The English title, Whisper of the Heart, was created by Studio Ghibli and used on several officially licensed “character goods” released around the same time as the film was released in theaters in Japan.

Over the course of the film, Shizuku is working on a fantasy novel that revolves around a cat figurine, named The Baron, that she sees in Mr. Nishi’s antique store. The short fantasy scenes that depict what she is writing in her novel were so popular with fans that Studio Ghibli released a film based on the baron in 2002 The Cat Returns.

Whisper of the Heart was the highest-grossing Japanese film on the domestic market in 1995, earning ¥1.85 billion in distribution income. Whisper of the Heart received very positive reviews from film critics. It has a 91% approval rating on review aggregator Rotten Tomatoes, based on 11 reviews. Time Out London included Whisper of the Heart in their Top 50 Animated Film list. It was also included in Film4’s Top 25 Animated Film list. On Anime News Network, Michael Toole gave it an overall grade of A-, calling it “beautiful and evocative; a fine tale of adolescent yearning and aspiration.”

General producer and screenwriter Hayao Miyazaki defended the film’s ending, saying that it was his idea. Miyazaki wanted Shizuku and Seiji to “commit to something.”