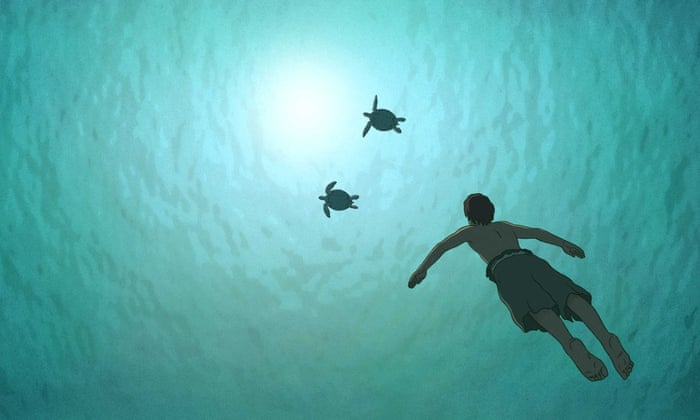 In the wake of Hayao Miyazaki’s The Wind Rises, Isao Takahata’s The Tale of the Princess Kaguya and Hiromasa Yonebayashi’s When Marnie Was There, there were reports that Japan’s celebrated Studio Ghibli had run its creative course. But at the Cannes film festival last year, a new pearl was unveiled proudly bearing the world’s most respected animation imprimatur.

Directed by UK-based Dutch animator Michaël Dudok de Wit, who won an Oscar for his 2000 short, Father and Daughter, The Red Turtle is an ambitious east-meets-west endeavour that had been gestating for a decade; a Japanese-French-Belgian co-production (a first for Ghibli) made at Prima Linea studios in Paris and Angoulême, under the long-distance supervision of Ghibli mainstays Takahata and Toshio Suzuki.

A poignant, wordless tale of a man shipwrecked on a desert island, it boasts a sublime simplicity that unifies its complex elements into a singular, universal voice. Eloquent, profound and moving, it left me with a heart full of bittersweet joy, a head dizzy with dreamy visions and cheeks wet from tears that rolled like waves on a distant beach.

We open with a blue-grey vision of the sea, rising like Mount Fuji against charcoal skies – the pre-credits shipwrecking of our nameless Robinson Crusoe. Marooned on an island that in profile resembles a giant whale, this sole survivor discovers a strange new world of scuttling crabs, bamboo forests, precipitous rocks and awesome isolation – Eden and Inferno intertwined. Initially desperate to escape, the man builds a series of rafts, each of which is scuppered by a vast sea beast – the titular red turtle. 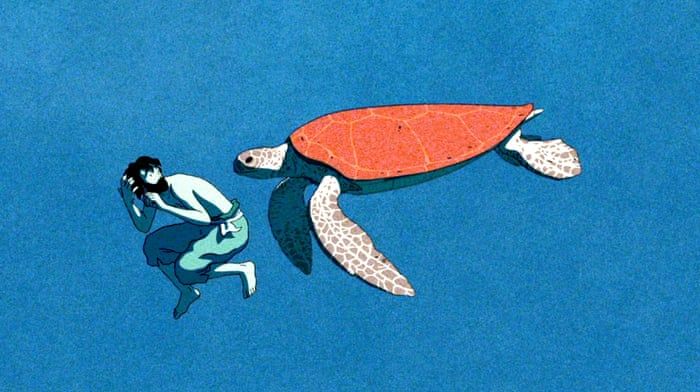 But after vengefully overturning this wondrous creature on the shore, our antihero experiences Ancient Mariner-style remorse, his empathy apparently prompting miraculous transformation. Just as the goldfish in Miyazaki’s sublime Ponyo turns almost unnoticed into a young girl, so the shell of this turtle falls away to reveal something astonishing, reminiscent of the selkies from the wonderful Irish animation Song of the Sea.

To explain more would spoil the experience of this magical realist fable for readers, a discovery that needs no words, just the finely observed gestures and crisp visual storytelling that defined the golden age of silent cinema. Suffice to say that the official one-line synopsis of The Red Turtle – “the milestones in the life of a human being” – rings entirely true; the cycle of birth, death and rebirth is expressed with piercing clarity.

Working with co-writer Pascale Ferran, Dudok de Wit has conjured a story that combines Ghibli’s familiar ecological themes (Suzuki says the director has “an eastern way of thinking”) with a narrative attuned to European sensibilities. Chief animator Jean-Christophe Lie keeps his talented team faithful to the director’s international influences: the clean lines of Belgian cartoonist Hergé; the strange beauty of French artist Jean Giraud (aka Moebius); the bold spaces of Miyazaki and Takahata.

Seamlessly combining analogue and digital animation (the granular heft of charcoal, the malleability of the computers), they compose a visual symphony that seems to comprise a history of cinema itself; from monochrome nights to richly hued days; from porous green trees to luminous blue seas; orange sunlight to pearlescent moonlight.

Crucially, this island is “real”; a carnivorous place in which spiders eat insects that feed upon dead fish, birds prey on crabs collecting carrion from the shores and our hero vomits at the stench of a dead seal whose skin he must harvest. When horror approaches in the shape of a tsunami, it is as urgently realised as anything from JA Bayona’s The Impossible. Haunting dream sequences (a turtle ascending into the night sky, a man flying in reveries of freedom) provide the crack through which surreal transformations seep, accompanied by the music of Laurent Perez del Mar, whose breathtaking score perfectly complements the minimalist visuals.

Integrating his cues with the natural soundscape, the composer utilises wood and bamboo percussion, gentle flutes and soaring strings to negotiate the film’s kaleidoscopic tones. The melodies have a nursery rhyme candour, yet encompass themes of longing and anguish, despair and delight, love and death.

I could say more, but this is a film that respects the sound of silence. It is a work of art which transcends boundaries of language, culture, geography and age. It is simply magnificent.