Have you ever dreamed of a world that exists in the sky, it could be a city suspended in the air, hidden among the swirling clouds of a giant storm or maybe a region sacred land of the residence of strange people? Let’s imagine, because in this article I will take you to the city of Laputa – an ancient city forgotten in the sky. Listening to this, many of you probably know what the animated movie you are about to talk about is.

Laputa – Castle in the Sky , is one of the first animated film of famous film studio Ghibli. This work is highly appreciated both in image quality and content. Although it has been more than 20 years since its release, Castle in the Sky has always attracted many younger audiences. So why Castle in the Sky is such an attractive film, then I will review the main content as well as some attractions of the movie.

Opening the film is the image of a large ship, Sheeta girl on board is being captured by the evil agents working under Colonel Muska. The ship carrying her was suddenly attacked by a group of hijackers, led by old lady Dola. Dola tries to catch Sheeta to get the string on her neck. Taking advantage of the chaos on the ship, Sheeta flees but under the pursuit of the hijackers, she falls off the ship. 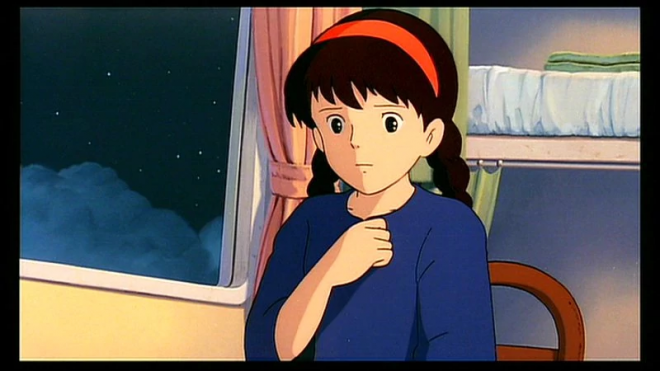 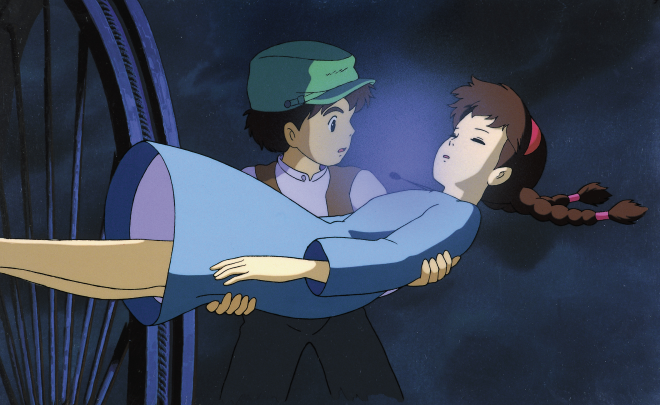 Sheeta is rescued thanks to the rope worn on her neck, she falls softly and is mined boy Pazu, Pazu takes Sheeta to his home, where Sheeta sees the picture of Laputa island, the boy Pazu explained about the picture that his father took and always believed that someday could find Laputa land in the clouds, though many people laughed at him.

The bandits of Dola immediately found Pazu’s house to capture Sheeta. The children fled on the train road but unfortunately, they were blocked by a steel ship of the secret agents and government troops. They are trying to capture Sheeta, once again Sheeta and Pazu fall off the train tracks that are collapsing, at this time Sheeta’s chain exerted the effect of saving the two children again. 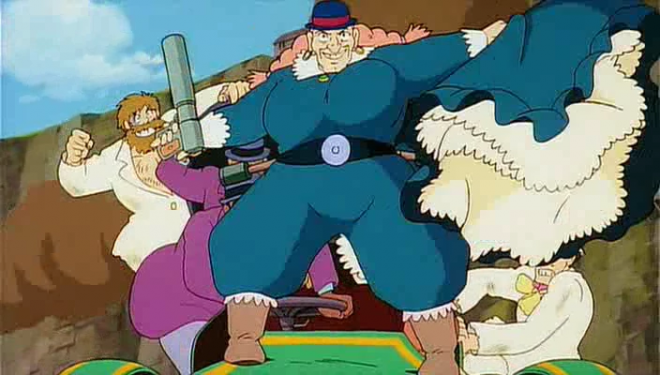 The two children landed on an abandoned mine, where they met the miner Pom,who told them that Sheeta’s crystal secret is one of the purest crystals, power the city of Laputa. Looking for a way back to the ground, unexpected government agents came to arrest Sheeta and Pezu. Both were taken to a separate fortress and imprisoned. Here, Sheeta is threatened by Muska, he will kill Pazu if she does not cooperate with him in the search for Laputa. Worried about his friend’s safety, Sheeta agrees with Muska to let him release Pazu and tells him to forget about her and Laputa.

Pazu returns to the village, he goes to find the bandits of Dola about the things he went through and begs Dola to take him along to find Laputa. In the fortress tower, Sheeta reiterated the reincarnated mantra, a crystal shining a ray of light leading to Laputa, the robot in the fortress works again and saves Sheeta’s life before being destroyed. Meanwhile, Dola and Pazu have come to rescue her. The balloon Goliath carrying Muska and the army immediately proceeded to Laputa. 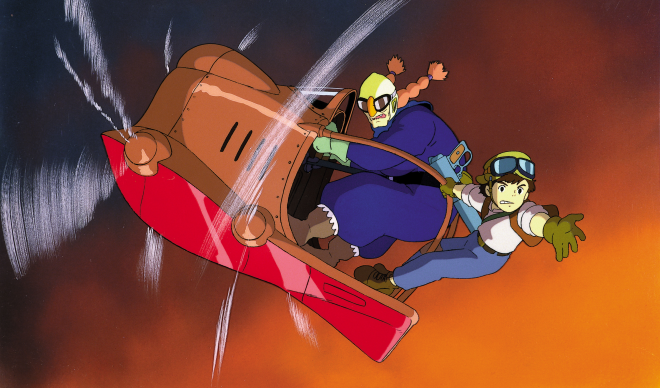 Sheeta, Pazu and bandits Dola on the pirate ship Tiger Moth chase Muska’s Goliath balloon in hopes of finding Laputa first. Tiger Moth meets the Goliath from the clouds and is violently attacked, they are lucky to escape but then the Tiger Moth goes into a big storm, forcing Sheeta and Pazu to observe Goliath by roller coaster. Goliath’s next attack caused both roller coasters to be blown away and landed on Laputa city. 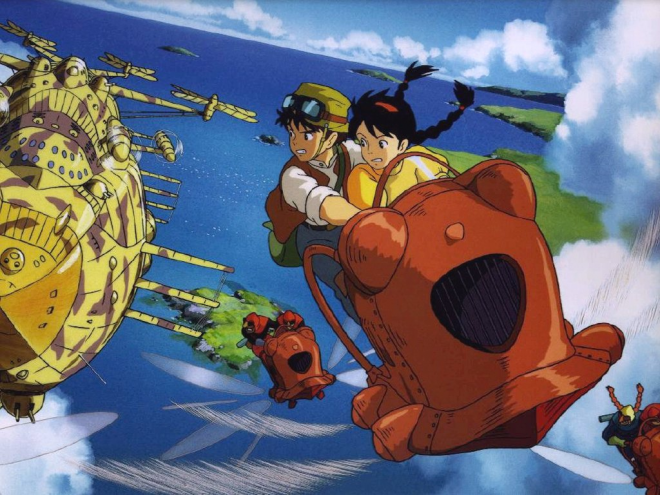 The city of Laputa appears to the astonishment of two children, there is only one robot amidst the rubble taking care of the land, on the piece of land Laputa is a giant tree, its roots feed on the city. 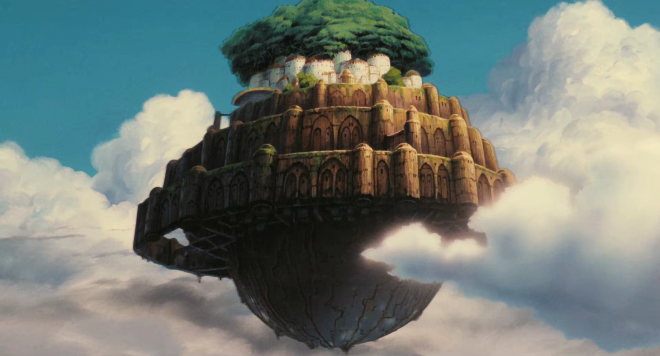 Not long after that, the Goliath arrived at Laputa, the greedy soldiers attempting to plunder the city’s wealth. Meanwhile, Tiger Moth was badly damaged, and Dola and the bandits were arrested. While Pazu tries to save Dola, Sheeta is caught by Muska and brought into the square 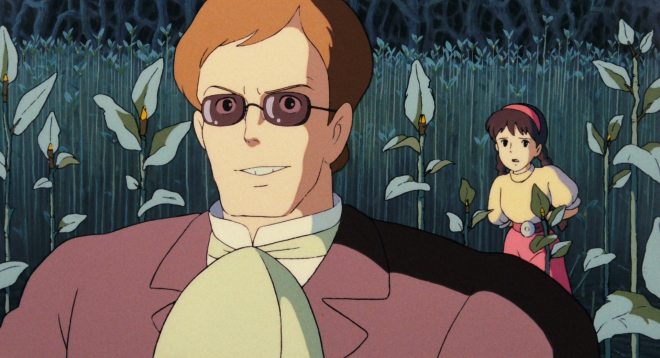 Muska brought Sheeta into the center of Laputa, the room kept a huge Aetherium crystal, which served as the city’s energy source. Muska is also a heir to Laputa’s throne, he controls Laputa to prove the city’s power. Muska activates all robots, wiping out troops and Goliath. Meanwhile, Sheeta took the opportunity that he did not pay attention to free himself, she regained the crystal and ran through the center when Muska followed closely. Finally, she finds Pazu and gives the crystal to him.

Being approached by Muska, there is no other way, Pazu and Sheeta decided to use the spell to destroy the city center in a short time, Muska fell down and Pazu and Sheeta were strongly thrown into the roots of the giant roots, they quickly find their way to the glider and leave the collapsing Laputa. The bandits Dola also escaped from Laputa safely, they met later and broke up happily. At the end of the film, the rest of Laputa city after the ruin continues to soar away from Earth. 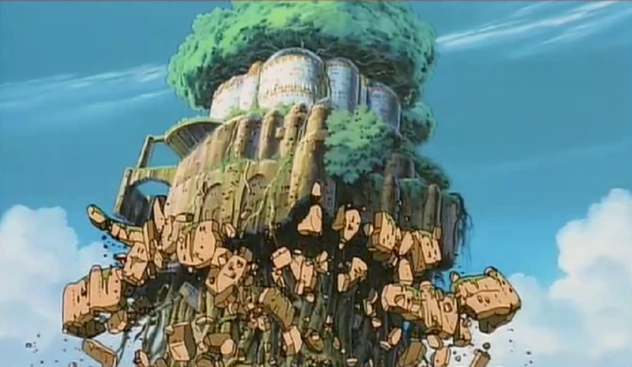 The lesson about greed will get bad results

Throughout the film, we can see that the author has sent a very deep lesson to each viewer, which is the image of Muska and the greedy army soldiers, because the treasure and power have returned into cold-blooded people, ready to destroy people. It is possible to see that the message that the author sent to us no matter how advanced the science and technology is, people cannot live away from moral values, which is inevitable. And of course, the outcome of evil in the film is also perfectly reasonable when Muska’s name is forever buried. Besides, the young people in the film, Sheeta and Pazu, are always willing to sacrifice to protect righteousness, protecting their ideals is also the character that the author wants people to turn to. After Howl and Sophie’s pair in Howl’s Moving Castle, Sheeta and Pazu are probably the Ghibli pair of characters I voted next because the couple is so cute and so …. well suited.

The soundtrack of the movie is the highlight