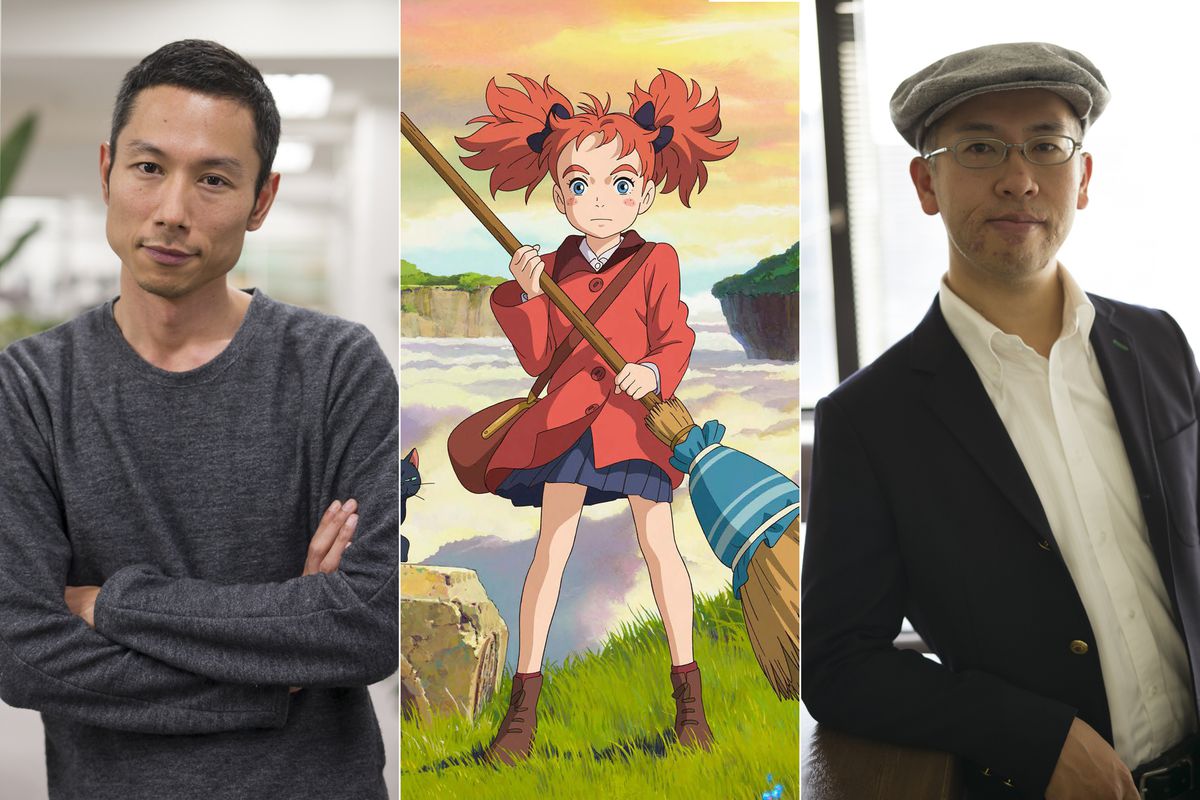 When producer Yoshiaki Nishimura first talked to director Hiromasa Yonebayashi about the project that would become the animated feature Mary and the Witch’s Flower, Yonebayashi had reservations. “I hesitated a little bit,” he tells The Verge, “because I thought it might be compared to Kiki’s Delivery Service, directed by Hayao Miyazaki, which was also about a young witch.”

It’s a valid concern. The film’s protagonist, Mary, is a forceful redhead who’s fairly different from the polite, dark-haired Kiki in Miyazaki’s film. But both movies are animated children’s fantasies about broom-riding little girls with black cat familiars. And Mary and the Witch’s Flower, based on Mary Stewart’s The Little Broomstick, looks and feels exactly like a project from Studio Ghibli, the famed Japanese animation studio Miyazaki and his partner Isao Takahata founded in 1985.

But that’s no accident, and Nishimura and Yonebayashi come by that heritage honestly. They’re both longtime Ghibli veterans who broke out on their own when Takahata and Miyazaki announced their retirement, and the studio moved away from feature animation. Nishimura and Yonebayashi brought the Ghibli house visual style and storytelling sensibility into their new venture, Studio Ponoc, which launched with Mary and the Witch’s Flower. For Ghibli fans, it’s a tremendous relief to see the studio’s sensibility and talent continuing, with many of its creators moving over to Ponoc to continue their work.

But there were a lot of financial and artistic risks involved in starting over. Yonebayashi compares their journey to the arc faced by the new film’s protagonist, a young girl who gains and then loses magical powers, and decides to soldier on with her human talents instead. “This felt similar to what we were facing in leaving the magical world of Studio Ghibli, and starting out as individuals to make a new film at Studio Ponoc,” he says. “I thought this was very meaningful as the first film we would make.” Through a translator, I recently spoke with both men about the studio’s founding, what makes them similar to and different from Studio Ghibli, and the theme that connects all of Yonebayashi’s films.

What was the process like of bringing Studio Ponoc together?

Yoshiaki Nishimura: This was a very difficult, tough three years for us. We were at Studio Ghibli until the end of 2014. And then two and a half years later, we had to complete a feature film, starting from zero, basically. And the two main difficulties were that we didn’t have the Studio Ghibli brand name, because our new studio was not known, and so trying to collect the financing was difficult. We had to work with a rather low budget. And at Studio Ghibli, there were 150 to 200 creators with the wonderful environment, with hardware, software, computers, servers all set up in the production studio itself. Whereas we had to start from zero, and build up that environment and equipment for our production.

We started with two to three people. But by the end, we were 450 creative people working on the film. Within these limitations, we had to aim for the quality and meaningful content similar to films Studio Ghibli had made. That was a very tough bar for us to accomplish.

Why this particular story? What was the draw?

YN: In order to make this first film for the studio, we thought it would be best to make a film that was quite the opposite from When Marnie Was There, the last film director Yonebayashi made at Studio Ghibli. When Marnie Was There is about a quiet girl in interior struggle. It’s a very calm movie. But the special talent director Yonebayashi has, that he gained from director Hayao Miyazaki at Studio Ghibli, is drawing dynamic action as an animator. So the idea was to have a very energetic girl moving around in a very fantastic way in a fantasy world. So the topic we chose was a witch.

I read many children’s books and young adult books to search for projects to film. Many of those — when a witch character faces difficulty — they use magic to solve the problem. The Little Broomstick was the only story I saw where the heroine rejects magic at a crucial point, at the most difficult point. The quote from the book is something like, “I’m not going to use magic to open this door. I’m going to use my own powers. However long it may take, I’m going to do it on my own.” I thought that would be wonderful for the first concept of the film, because we have left the magic umbrella of Studio Ghibli, and now we have to walk with our own strength and power. So this fits the situation that director Yonebayashi and I as producer and other former Studio Ghibli creators faced as well.

What kind of opportunities did you get from starting over, in term of structuring your company, or bringing in new animation technologies or methods?

YN: There were certain things we could and could not do at Studio Ghibli. Basically, all the projects were decided on by the two founding directors, Isao Takahata and Hayao Miyazaki. They developed projects, then assigned them to the staff. I wasn’t dissatisfied with that, or with working at the studio. But now that we are on our own, we have to start projects from zero, from the start. It gives us a chance to really work on things from the ground level.

In terms of the kinds of stories that were being made at Studio Ghibli toward the end — the two directors were already getting along in years. Miyazaki has turned 76, and Takahata just turned 82. So there, a lot of the stories toward the end were stories of parting. Tale of the Princess Kaguya and The Wind Rises reflected the directors’ stage in life, dealing with issues of life and death. Those stories resolve in parting. When they were younger, in their 30s and 40s, they handled different types of topics — lively encounters of people meeting.

So with this picture, director Yonebayashi and I wanted to veer away from these themes of parting, which I handled as a producer for The Tale of the Princess Kaguya and Marnie, and he had directed with The Secret World of Arietty and When Marnie Was There. We’re at the same age when Miyazaki and Takahata first started off, and now that we are parents of small children, we want to have that kind of active starting-off, people-meeting-up kind of story. 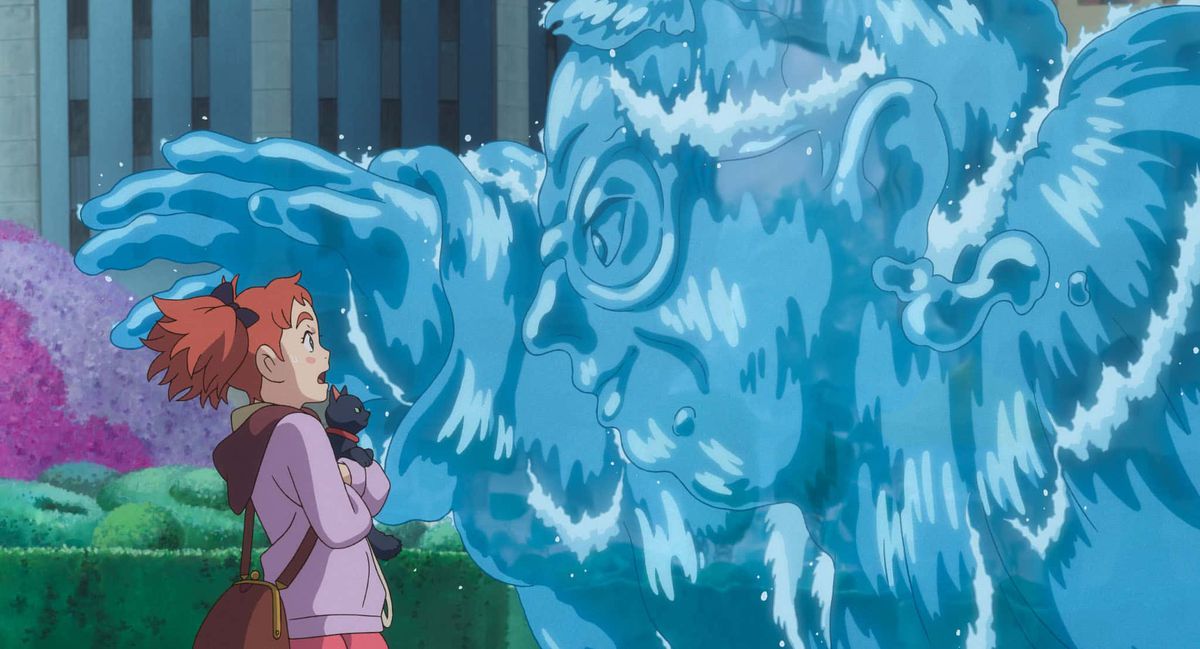 Are you taking this as a chance to try new animation techniques?

Hiromasa Yonebayashi: I think it depends on what we want to convey through the film, the kind of methods we use, and the kinds of technologies we use. There are different methods of expression. My basic thought is that hand-drawn animation is very good at expressing characters’ emotions and movements. But I’ve also added 3D and CG effects to enhance the experience for the viewer. This is what I learned, being an animator for 20 years at Studio Ghibli.

In Mary and the Witch’s Flower, I wanted Mary to be able to be very active in her movements, and show that on-screen, and I thought the hand-drawn method worked well for that. There are many animation works that use CG, but we had many staff members who were very talented at hand-drawn animation, and I wanted to feature their strengths in the film. If I try a different type of subject matter, I might use some other technique in the future.

There are many visual elements in Mary and the Witch’s Flower that feel like references to Ghibli films like Kiki’s Delivery Service, Howl’s Moving Castle, and Spirited Away. Were you and your animators making deliberate homages? Is it more because you’re working with the same artists?

HY: It’s not that we consciously were thinking of creating an homage to those previous films. At Studio Ghibli, I learned how to make things move in a certain sort of way, a way of thinking about animation and characters, working under director Miyazaki. So I’m sort of steeped in that background. Many of the creators who worked on this film also were people who had worked at the studio. So we all are sort of infused with the spirit of Studio Ghibli. Maybe that was coming out.

One of the things that most distinguishes this from a Studio Ghibli film is the villains. Ghibli villains usually transform into friendly figures, but this movie has people with authentically bad intentions, who do terrible things. How did you think differently about the antagonists here than you would have in your past films?

HY: In my mind, they aren’t necessarily purely evil. They have their own goals in mind, and they’re very focused on them. Mary wants to transform herself, wants to change herself from the girl who lacks confidence and is dissatisfied with herself, into something stronger. The antagonists want to change and transform others, which they think will lead to happiness. I think that relates to the kinds of things we have around us in our present day, where people are trying to change other people.

For example, in schools we might be teaching or forcing students to think in a certain way, rather than allowing freedom of expression. As parents, we try to force certain things onto our children, telling them something that they did was not good, and they should behave in this other way. So I think transforming others is ultimately something we shouldn’t be doing. We should be encouraging people to transform themselves. Mary and Peter in this story want to change themselves for the better, and they eventually come to be able to do that. And that becomes a very confrontational moment. I think the audience perhaps can get to that idea, and root for the people who want to transform themselves.

You’ve directed three films at this point, all based on fantasy novels by Western women. Is there a particular connection there?

HY: I hadn’t realized that all of these authors were women, so it must be a coincidence. But all three stories feature a young heroine who is able to make the next step in her life. So my interest is that instant where young people are able to not make a huge, major transformation, but take a small step to grow a little bit more, to become a little bit more confident, to make the next step in their lives. For other people, from others’ point of view, it may not seem like that big a step. But for them, it’s a very big thing to be able to do this. I like to deal with that instant where characters are making that change. And I think when viewers who are struggling with their own lives see this kind of story, that helps them get some courage, and it has meaning for them.

What’s next for Studio Ponoc? Are you are you planning on making more films that look and feel like Studio Ghibli? Does the studio want to branch out further?

At Studio Ponoc, we are working on four short films right now. One is being directed by director Yonebayashi, and there are three other directors working on the other shorts. But we also are determined to continue making feature-length film. And for us, the heroes and heroines are the children we are making the films for. We want to continue to make films that both children and adults can enjoy watching together. That is our mission, and that’s what we have brought forward from our experiences.

What is the release plan for those four shorts?

YN: Right now, what we’re going to do with those four shorts is still undisclosed. When we are ready to announce that, of course we’ll let you know at The Verge as well!